How many Chinese cuisines are there? The most influential and typical known by the public are the “8 Chinese Cuisines”. Actually Chinese cuisine has more than 8 genres. China is large and the climate, ingredients, history and dining customs vary from place to place, leading to the differences in cooking methods and dish flavors and forming the different cuisines.As early as the Shang Dynasty (17th century BC - 1046 BC) and Zhou Dynasty (1046 - 256 BC), China’s dietary culture has taken shape. In the Tang Dynasty (618 - 907 AD) and Song Dynasty (960 - 1279 AD) , the northern and southern food already had their own characteristics: generally sweet in south and salty in north. By the early Qing Dynasty (1644 - 1911 AD), four most influential cuisines prevailed. What are the four main styles of Chinese cuisine at that time? They are cuisines of Shandong, Sichuan, Guangdong and Jiangsu respectively. By the end of the Qing Dynasty, the four new cuisines - Zhejiang cuisine, Fujian cuisine, Hunan cuisine, and Anhui cuisine appeared; together with former four cuisines, they were listed as “8 Chinese Cuisines”.Today, the hot and spicy Sichuan and Hunan cuisines are the most popular in China; the Cantonese cuisine with light taste and delicate cooking methods is not only sought after in China, but also popular around the world. 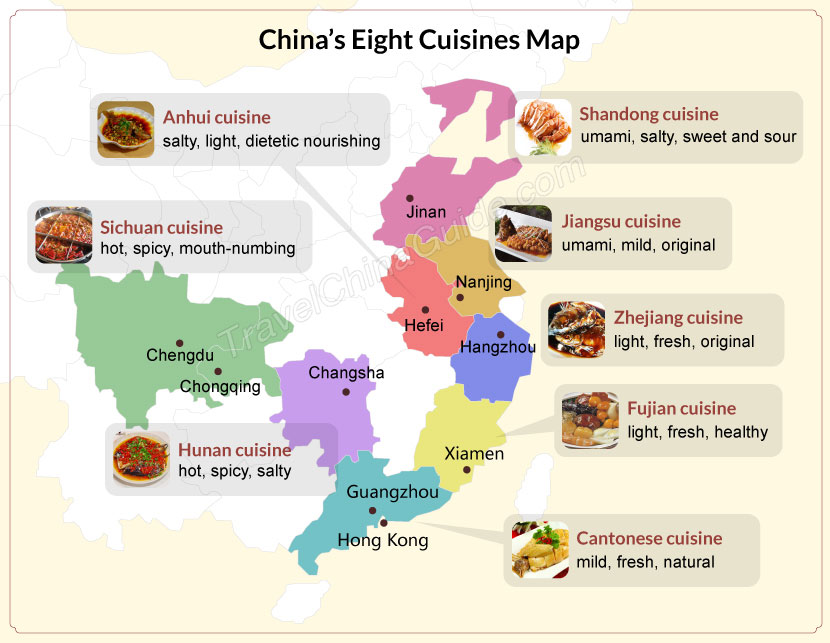 In Shang and Zhou Dynasties, China had developed its dietary culture. By Tang and Song Dynasties, the dining customs in the north and south developed respectively. People in North liked sweet food while in South liked salty food.During the Southern Song Dynasty (1127 - 1279 AD), the northerners moved to the south in large numbers. Gradually, the northern food culture had influenced the south and formed its own style in the south. By the end of the Ming Dynasty, the Chinese cuisine was divided into Beijing style, Jiangsu style and Cantonese style. Beijing-style dishes were salty, and the Jiangsu-style and Cantonese-style dishes were sweet.By the early Qing Dynasty, there existed four most influential cuisines: Shandong cuisine, Sichuan cuisine, Cantonese cuisine and Jiangsu cuisine.Later, the dining habits of various parts of China developed considerably. Sichuan cuisine was further divided into Sichuan cuisine and Hunan cuisine. Cantonese cuisine was divided into Cantonese cuisine and Fujian cuisine. Jiangsu style cuisine was divided into Jiangsu cuisine, Zhejiang cuisine and Anhui cuisine. By late Qing Dynasty, Sichuan, Cantonese, Hunan, Shandong, Jiangsu, Zhejiang, Fujian, and Anhui cuisines gradually become the most influential and popular, finally forming “8 Chinese Cuisines”.