How to make "Nine Turn Large Intestine", a famous dish in Jinan?

Thank you for answering. "When you come to Jinan once and don't eat nine rounds of large intestine, you are embarrassed to say that you have been to Jinan." Although this is a bit ridiculous, it can indeed see the weight of Jiuzhuan large intestine in Jinan cuisine. 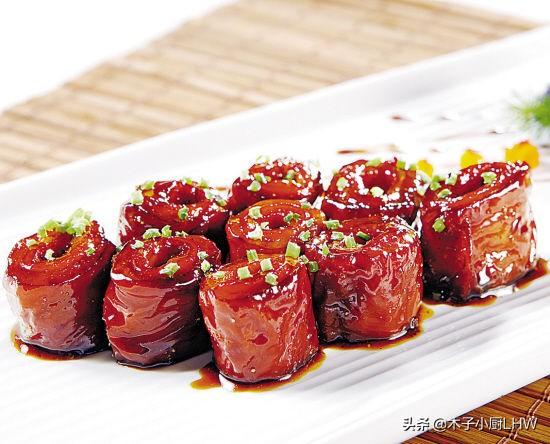 Jiuzhuan Large Intestine is a typical representative of Jinan Pailu cuisine, first created by the owner of Jiuhualou, a long-established restaurant in Jinan. At that time, the name was braised large intestine. The large intestine was cooked, fried, and then roasted. The process is more complicated, the cut is fierce, the taste is thorough, and the taste of the dish is "sweet, sour, bitter, spicy and salty". This elegant name was given by the elegant people, which means that this dish is as delicate as "Jiu Lian Jin Dan".

I remember in the first episode of "If You Are the One", as a male guest of the chef, compare the personality characteristics of the host Meng Fei to a dish. The implication of life is like making "Nine Turns to the Large Intestine", which has all the sweet and sour tastes, and can be harvested with good intentions. 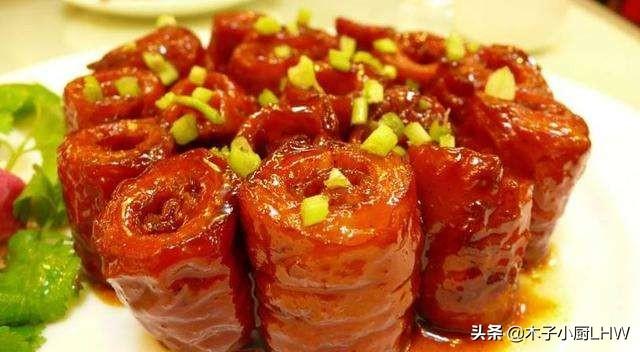 At that time, the hotel's classic Lu cuisine was made by a Lu cuisine master himself. Later, under the guidance of the master, I also slowly learned to make a nine-turn colon.

The first step: buy two pounds of fresh large intestine, first turn out the inside of the large intestine by hand, hang off the fat, then add salt, white vinegar, and flour to clean it inside and outside. With both hands, pull up from the thick end, and slowly insert the slightly intestine into the thicker intestine and straighten it. Fix both ends with a toothpick. (It looks like the large intestine is even in thickness) 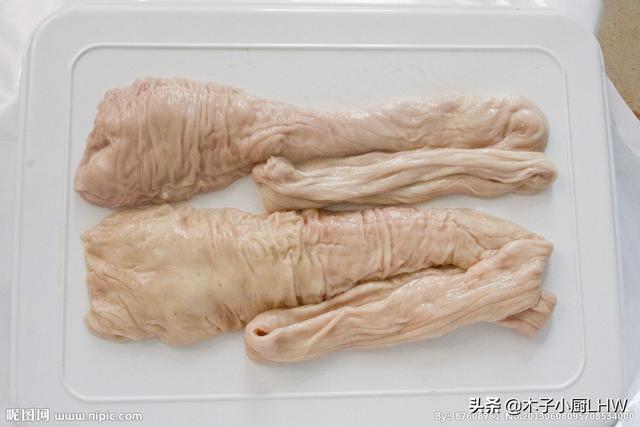 Step 2: Put the large intestine in a cold water pot, add a spoonful of cooking wine, boil on high heat, skim off the floating foam, remove it and clean it again after shaping.

The third step: take a stainless steel pot, put the onion section, shoot ginger, cooking wine, two star anise, salt and large intestine, and put in water. Bring to high heat and simmer, cook on low heat for about 40 minutes. Remove when you can easily pierce through with chopsticks and let cool.

Step 4: Change the cool large intestine to a section that is three centimeters taller, and then insert a toothpick to fix it. Every twelve paragraphs is a copy. 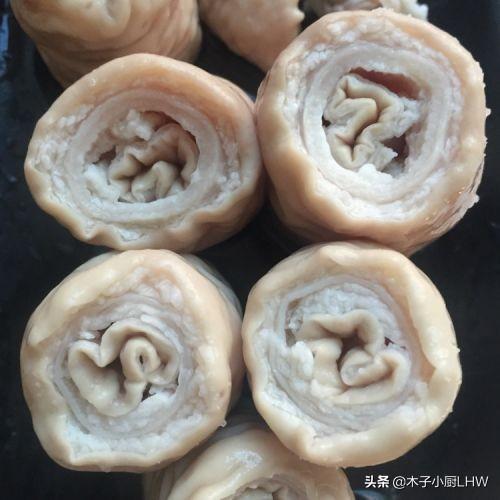 Step 6: Brush the pan again, add a little base oil to moisten the pan, and pour out the oil. Put a spoonful of white sugar into about 50 grams, and slowly stir-fry to a sugar-colored state. Immediately add a spoonful of rice vinegar and a spoonful of cooking wine, and then add broth or 200 grams of water to mix well. Grams, 3 grams of pepper, moderate amount of salt, a little flavor is very fresh, slowly simmer on low heat, when the soup is thick, sprinkle 3 grams each of cinnamon powder and amomum powder, then naturally harvest the juice, and finally add Just a little sesame oil out of the pot. 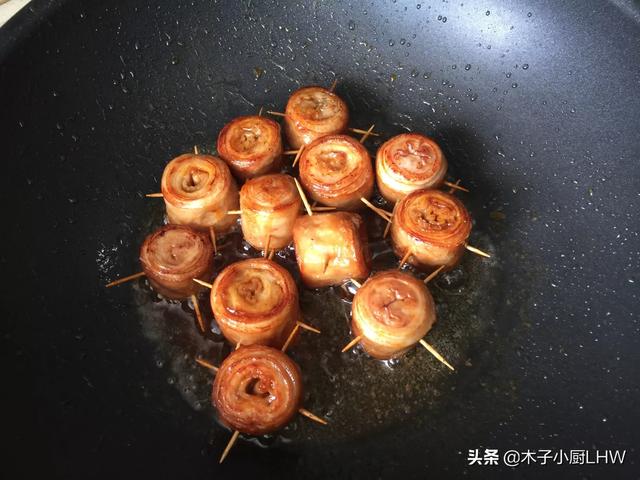 1. Q: This set of intestines is too troublesome, is there any simple way?

Answer: The main function of Amomum villosum powder is to remove the dirty smell. Cinnamon is scented, and Amomum has a slight bitterness. This is also the essence of the Jiuzhuan large intestine. Adding these two kinds of powder makes the large intestine full of sweet and sour, bitter and spicy. The taste is more charming.

3. Q: The large intestine is cooked, why should it be fixed with a toothpick?

Answer: There is an oiling step next, and a simmering process in the later stage. It is fixed with a toothpick and the firing will not fall off in layers.

4. Q: It seems that the authentic nine turns of the large intestine is not oily, right? 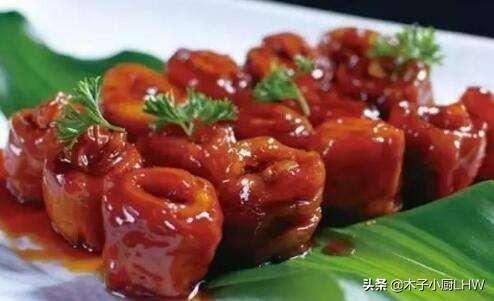 1. The main ingredient is the large intestine, which is the thickest and straightest section.

2. The large intestine must be washed well in the early stage, salt, vinegar, and flour. This step is very important. If you can't remove this dirty smell, no more seasoning will be useful.

4. In this dish, the sugar color can be fried a little bit older, highlighting the jujube red color, but not the bitter taste. 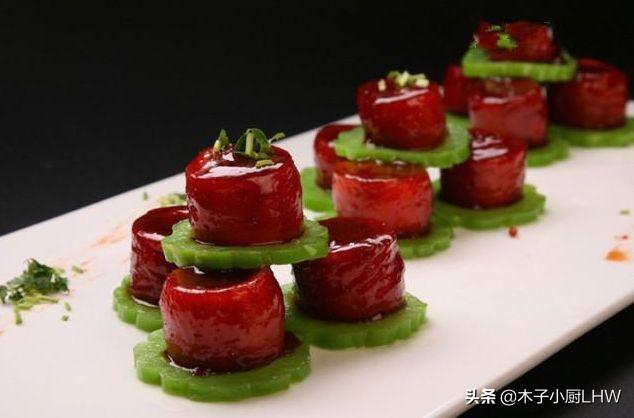 Link: According to the taste of modern people, on the basis of the five flavors, chefs who like innovation have also created the practice of using soaked hawthorn with Jiuzhuan large intestine. 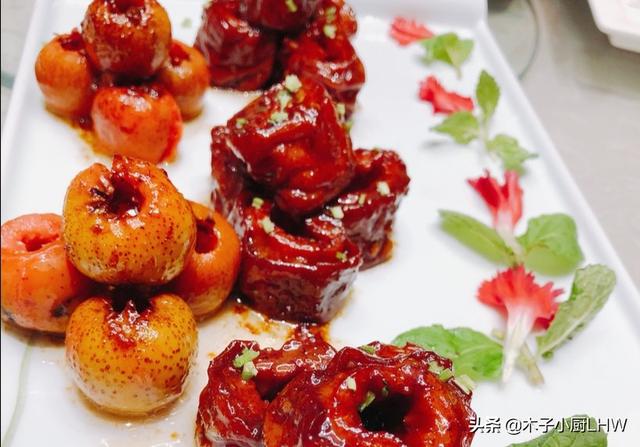 Write at the end

The nine flavors of the large intestine are five kinds of sour, sweet, bitter, spicy, and salty. The sour taste comes from rice vinegar. Of course, sweetness is white sugar. The bitterness is because of putting amomum powder and cinnamon powder. Soy sauce. As long as you are proficient in these taste points, you can also make a full-fledged nine-round large intestine.

Okay, here's how to make "Jinan's Famous Dish Nine Turns Large Intestine". Don't know what you learned after reading this article? If you have different opinions, please leave comments and exchanges in the comments area.

The above are some practical experiences I have summarized. I hope it will be useful for everyone. Like the work, remember to like it, or forward it to more people who need it. And by the way, pay attention to Muzi Kitchen, I will continue to share your cooking experience and technical dry goods for you. thanks for watching.

Previous10 must-try foods to come to Shandong, how many have you eaten?

NextFood appreciation: food on the tip of the tongue-Shaanxi